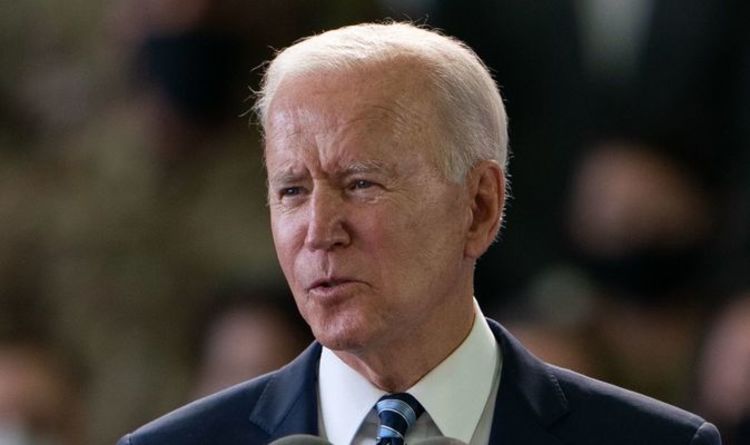 The US President arrived in the UK on Wednesday for his first overseas visit since taking office. Mr Biden’s national security adviser, Jake Sullivan, warned the President has “very deep” concerns over the Brexit border tensions with Northern Ireland.

The UK and EU have had hostile talks over checks on goods going between Great Britain and Northern Ireland.

The dispute dubbed the “sausage wars” escalated on Wednesday after negotiations between Britain and the bloc ended without an agreement.

Talks between Britain and the EU took place to decide whether the UK should delay protocols which would involve customs inspections of chilled meats moving from mainland UK to Northern Ireland.

According to the Times, Mr Biden ordered US officials to issue the Prime Minister with a diplomatic rebuke for endangering the Northern Ireland peace process over Brexit.

America’s most senior diplomat in Britain, Yael Lempert, reportedly told Brexit Minister Lord Frost last week that the Government was “inflaming” tensions in Ireland and Europe due to its opposition to checks at ports in the province.

It said the US diplomat urged Lord Frost to agree on a negotiated settlement even if it meant “unpopular compromises”.

A Government memo of the meeting added: “Lempert implied that the UK had been inflaming the rhetoric, by asking if we would keep it ‘cool’.”

The US diplomat also suggested that if Britain agreed to follow EU agrifood rules to reduce checks, Mr Biden would ensure this “wouldn’t negatively affect the chances of reaching a US/UK free trade deal”.

The publication added that Lord Frost rejected the recommendations and suggested the President should tell the bloc to pursue a “less purist” approach to implementing the protocol.

Unionists strongly oppose the checks on goods because they do not want Northern Ireland to be treated differently to the rest of the UK.

The President’s national security adviser Mr Sullivan said the success or failure of the protocol was “critical to ensuring that the spirit, promise and future of the Good Friday Agreement is protected”.

He urged Britain and the EU to “work out the specifics” and “find a way to proceed that works for both”.

Mr Sullivan added that this will be the “message President Biden will send” at the G7 summit.