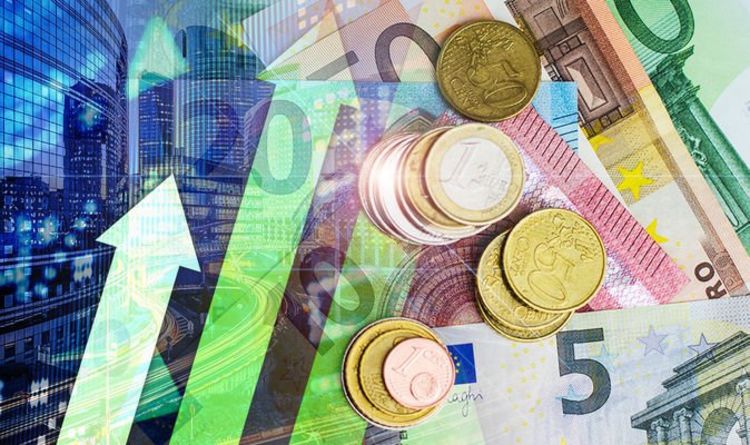 The pound to euro exchange rate has ascended further and further over the past two weeks. GBP hit nine-week highs before climbing to 10-week highs. Now, sterling “remains well-supported in the high-1.15s,” said experts.

New labour market data is out today but is unlikely to impact sterling.

The pound is currently trading at 1.1559 against the euro, according to Bloomberg at the time of writing.

“Sterling remains well-supported in the high-1.15s, however has yet to be able to make further headway, largely owing to a strengthening common currency,” he said.

“The ‘vaccine trade’ thesis may also be close to coming to an end, given the rather cautious and sluggish path out of lockdown announced yesterday by the PM.

“Labour market data is due from the UK this morning, and will likely show a rise in unemployment, though this shouldn’t weigh on sterling too significantly, given that the data remains heavily skewed by the furlough scheme.”

“Ahead of the UK Budget next week, all eyes are on the UK government’s plans to reopen the economy, which is looking promising for the UK growth outlook relative to its European peers,” Vessey said.

“On the data docket, January’s final Eurozone inflation results are due on Wednesday, which previously showed a jump to their highest level since the pandemic struck last year.

“German sentiment surveys will also be released on Tuesday and Thursday unveiling the morale amongst households and companies during the latest lockdown.

“The data could surprise to the upside given the better-than-expected German composite PMI print last Friday thanks to the recovering manufacturing sector.

“The Euro is a pro-cyclical currency, often strengthening in times of expected global growth, but the slower vaccination rollout across European countries, coupled with rising US yields, means downside pressure on the common currency is growing.”

So what does all this mean for your holidays and travel money?

The good news is, travel money providers are offering much more favourable rates than previously.

However, experts warn against buying holiday money while uncertainty continues to reign amid Covid.