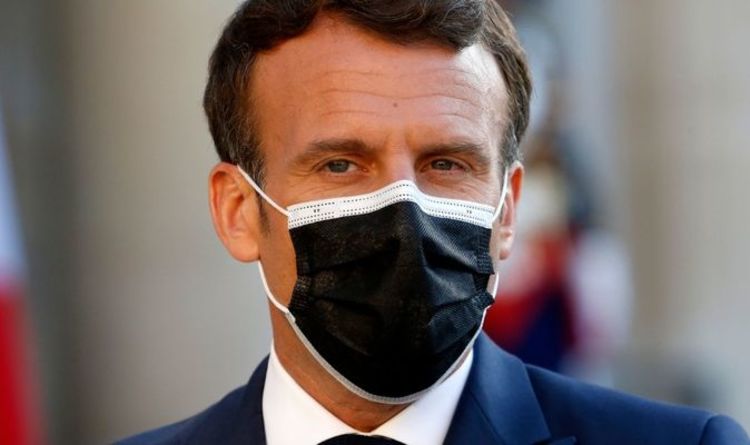 President Emmanuel Macron stressed that he would veto any attempt to revise the Protocol to avoid a hard border or extend “grace periods” on Brussels red tape. In comments that will likely stoke up tensions between the UK and EU, he said it was “not serious” to revisit the agreement. Mr Macron said: “I think it’s not serious to want to review in July what we finalised after years of debate and work in December.

“We have a protocol under which there is this Northern Ireland Protocol and we have a trade deal.

“It has been painfully discussed for years, and discussed, let me remind you, on the initiative of the British who decided to leave.”

His remarks will add fuel to the fire with the threat of a looming trade war over UK sausage exports to the region.

The “grace period” covering the EU’s blockade on chilled meat shipments to its single market is due to expire at the end of the month.

Without an agreement, British sausages and burgers will not be allowed to enter Northern Ireland.

The row centres on the Brexit deal that created a regulatory border between Northern Ireland and the rest of the UK, keeping NI in the single market.

Mr Macron’s intervention came before he is due to meet Prime Minister Boris Johnson later today at the G7 summit in Cornwall.

The issue was also raised by President Joe Biden during his first meeting with Mr Johnson yesterday.

The two leaders said they had been in “complete harmony” on the need to uphold the Good Friday peace process.

Asked whether Mr Biden raised alarm bells over the situation in Northern Ireland, Mr Johnson said: “No, he didn’t. What I can say is that America — the United States, Washington — the UK plus the European Union have one thing we absolutely all want to do and that is to uphold the Belfast Good Friday agreement and make sure we keep the balance of the peace process going.”

She added the EU is “determined to do everything to keep peace and stability on the island of Ireland. It is important that there is deep respect for the protocol, that we protect it.”

The EU sought to cool tensions after DUP leader Edwin poor accused the bloc of “damaging the peace process”.

And responding to a question on the planned EU ban on sales of chilled meats from Britain in Northern Ireland, Trade minister Ranil Jayawardena told MPs: “We will stand up for the British sausage.”