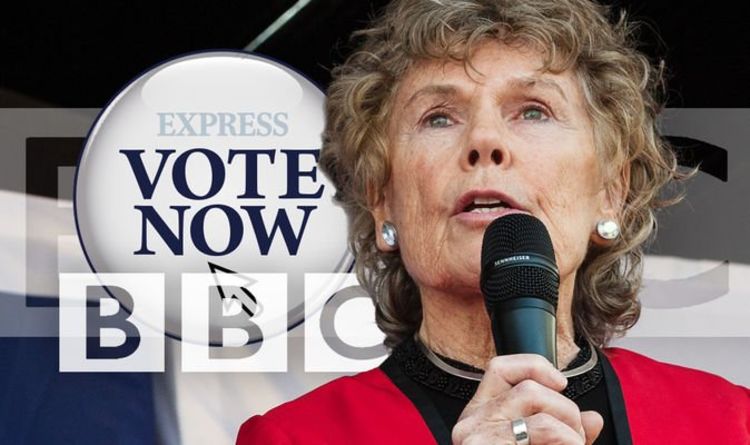 Express.co.uk readers can vote in our poll on whether you think the BBC “sided” with the EU on Brexit. And when you have voted scroll down and leave a comment with your views.

Our poll comes as Brexiteer Baroness Hoey launchd a furious attack on the broadcaster in a Twitter post.

She said: “When the history of the Brexit period is written the BBC will be shown to have totally sided with the fear mongering EU.

“Most @BBCNews journalists could not accept that the British people ignored their views and voted to Leave.”

Baroness Hoey’s comments were in response to a tweet by Defund The BBC which insisted the corporation had “gone into meltdown” following Boris Johnson’s announcement on Friday that the UK would prepare for no deal.

The campaign group shared a clip of the BBC’s Europe correspondent Chris Morris, who warned an “acrimonious” exit from Brussels would put substantial pressure on businesses that trade with the bloc.

The group tweeted: “The BBC has gone into meltdown over the Prime Minister’s statement this afternoon.

“What version of Project Fear are we up to now?

“NB only 6 percent of British businesses export goods to the EU but this BBC correspondent chose not to balance his reporting with that. #DefundTheBBC.”

“I hope history will correctly reflect the heroism of those who voted to leave the EU and the spite of the treacherous elite who attempted to betray us.”

Another added: “One of many reasons why I no longer have a tv licence, sick of the BBC telling me how I should think this is not their role.”

“The Beeb seems to have been invaded at the very top by some self-righteous individuals intent only on portraying their views using the BBC as their voice.”

In a televised statement on Friday, the Prime Minister blasted the EU for refusing to give Britain the same agreement it struck with Canada.

Mr Johnson declared that unless there is a “fundamental change of approach” from the bloc, the UK will leave with an Australian-style arrangement – which would be a no-deal outcome with trading under World Trade Organisation (WTO) terms.

He said: “They want the continued ability to control our destiny and freedom, our fisheries, in a way that is completely unacceptable.

“Given that this summit appears to explicitly rule out a Canada-style deal, I think that we should ready for January 1 with arrangements that are more like Australia’s.”

In response to Baroness Hoey’s comments, a BBC spokesman said: “The BBC continues to report Brexit impartially and features a wide range of different perspectives across our news coverage. Our journalists report independently and without fear or favour.”