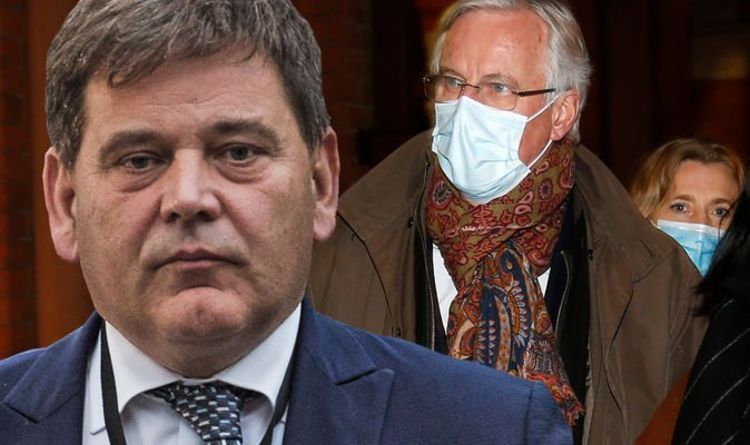 Tory MP Andrew Bridgen claimed fishing – which has proved one of the biggest sticking points in negotiations between Britain and Brussels – is a distraction. The Brexiteer warned the EU will drop the issue and instead demand a compromise on the so-called level playing field, aimed at preventing unfair competition by cutting standards or increasing state subsidies.

Mr Bridgen tweeted: “Despite Macron’s faux rage, the fish issue is a Red Herring and will be ditched at the last minute, the EU will ask the UK to compromise on what they really want which is the so called ‘level playing field’.

“This would hamstring the UK forever with EU regulations.

“We must not surrender our red lines.”

Mr Bridgen’s warning comes as face-to-face negotiations between chief negotiators Lord Frost and Michel Barnier are due to continue in London on Saturday.

Ahead of the talks, Lord Frost insisted a deal is still possible but only if Brussels recognised British sovereignty in key areas.

He tweeted: “Some people are asking me why we are still talking.

“My answer is that it’s my job to do my utmost to see if the conditions for a deal exist.

“It is late, but a deal is still possible, and I will continue to talk until it’s clear that it isn’t.

“We will continue to work hard to get it – because an agreement on any other basis is not possible.”

Face-to-face negotiations in Brussels were suspended a week ago after a member of Mr Barnier’s team contracted coronavirus.

But the bloc’s chief negotiator has now said “physical negotiations” can resume.

Mr Barnier tweeted on Friday: “In line with Belgian rules, my team and I are no longer in quarantine. Physical negotiations can continue.

The transition period ends in just over a month on December 31.