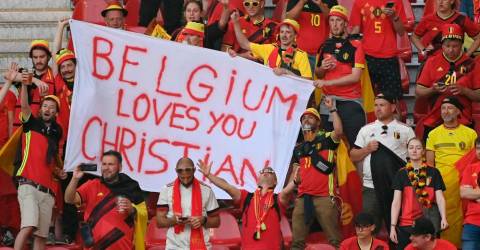 COPENHAGEN: Denmark’s game against Belgium at Euro 2020 was interrupted after 10 minutes Thursday to allow players and supporters at Copenhagen’s Parken Stadium to take part in a round of applause for Christian Eriksen.

The 29-year-old Denmark midfielder is recovering in hospital after suffering a cardiac arrest and collapsing on the pitch during Saturday’s Group B game against Finland.

A section of fans in the roughly 25,000 crowd held up a banner reading “All of Denmark is with you, Christian” as the referee briefly halted the match with Denmark leading 1-0 through a second-minute goal from Yussuf Poulsen.

A huge flag in the shape of a Danish shirt with Eriksen’s name and number 10 was unfurled on the pitch before kickoff, while Denmark captain Simon Kjaer received a framed Belgium shirt signed by the squad.

“This tragedy woke up Denmark. We’re a small country and we stick together when someone we love is suffering,” said Thomas Andersen, a 44-year-old supporter.

“The whole city of Copenhagen is full of supporters. It’s so great to see, it’s very moving.”

The walls of the fan zone are painted with messages of support for Eriksen, the effect of Saturday’s traumatic scenes felt across the capital, from the stadium to the popular Nyhavn canal district.

“I wrote ‘gold for Eriksen’ because we want to bring back the Euro title for him,” said Frantz Petersen.

Even the Rigshospitalet where Eriksen remains under observation, barely a kilometre from the Parken ground, is draped in several flags.

The Danish Football Union (DBU) said earlier Thursday that Eriksen would have a heart defibrillator implanted after undergoing a series of tests.

“After Christian has been through different heart examinations it has been decided that he should have an ICD (heart starter),” the Danish FA said in a statement on Twitter.

“This device is necessary after a cardiac attack due to rhythm disturbances,” it added.

The DBU provided no details on the potential consequences for the Inter Milan player’s future career.

For Bo Holbek, a surgeon who came as a supporter, he thinks it’s unlikely Eriksen will be able to return.

“It will be a big loss for football both in Denmark and Europe,” he said. – AFP