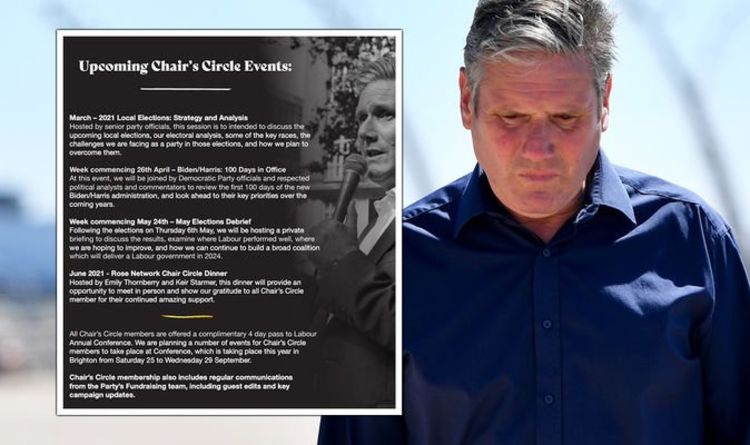 Express.co.uk has seen a brochure from earlier this year that invited members of Labour’s exclusive Rose Network Chair Circle the chance to have dinner with the party leader. The document invites a “passionate group of Labour donors personally committed to supporting Labour’s key electoral campaigns” to meet personally with Sir Keir Starmer.

It comes just days after Labour’s Anneliese Dodds accused the Conservatives of giving “a select group of elite donors to gain privileged access to the Prime Minister and the chancellor”.

Labour criticised the Tories for its “advisory board” of donors which allowed supports of the party to meet with frontbencher politicians.

She said last week: “The Conservative Party needs to explain what access this group had, what they have used that access to lobby for, and why they think it’s okay for there to be one rule for high-ranking Conservatives and another rule for everyone else.”

However, the unearthed document distributed by Labour makes clear they too have been granting donors access to the party’s top team of MPs.

Those looking to have access to Sir Keir Starmer were required to pay £5,000 into the party’s coffers.

They would then be invited to a dinner to with the Holborn and St Pancras MP to “provide an opportunity to meet in person and show our gratitude to all Chair’s Circle members”.

Conservative party chair, Amanda Milling criticised the party for being culpable of publicly attacking the Tories while behaving in the same manner in private.

She said: “This is classic Labour hypocrisy.

“They publicly attack Conservative fundraising while at the same time quietly putting on dinners with Keir Starmer for their own donors.

Up to £500,000 in monthly income has been lost as a result of the drop in membership.

It has left the party short of funds as it seeks to prepare for future election campaigns.

Up to 90 staff at the party’s headquarters are set to be made redundant because of the budget hole.

Pleading for extra money from donors in the Rose Network’s Chair’s Circle brochure, the party admitted it is desperate for more cash.

The brochure reads: “At the last general election, the Tories raised nearly four times as much as Labour.

“We are determined not to lose the next general election due to lack of financial support.