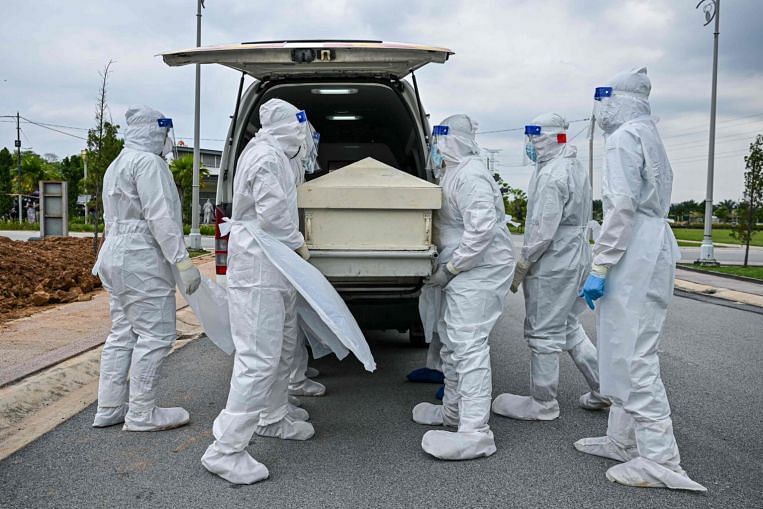 KUALA LUMPUR – A growing number of Covid-19 patients are dying before they can make it to a hospital in Malaysia and experts are concerned about the trend.

They say this may be due to newer and more virulent variants of the coronavirus, such as the Delta variant first identified in India, emerging in the country.

The condition of patients may have deteriorated faster because of the new variants, the government’s Covid-19 Epidemiological Analysis and Strategies Task Force chairman, Professor Awang Bulgiba Awang Mahmud, told The Straits Times.

Data from the Ministry of Health showed that 370 victims were classified as brought in dead (BID) at hospitals as at June 14. More than half of that number or 195 cases were registered in the four weeks between May 14 and June 14.

Only 136 cases were reported as BID for the whole of last year.

The number of Covid-19 deaths overall has also spiked, from just 471 last year to more than 3,000 so far this year.

“Since those patients were not admitted to the hospital, they may have deteriorated rapidly. We do not have post-mortem reports on them, so it is difficult to know what they died of and Malaysia’s genomic or epidemiological surveillance is low, so we do not have a clear picture of the virulence of the current variants,” said Datuk Awang Bulgiba.

Infected persons may have brushed off their symptoms as just the common cold or a minor cough, not thinking that they had been infected with Covid-19.

Thus they were not tested and when they deteriorated rapidly, they were brought in dead, he added.

Furthermore, for some remote areas such as the interior of Sabah and Sarawak, medical facilities may be far away and not readily accessible.

Variants may have different signs and symptoms of infection, and patients may not recognise them as being due to a Covid-19 infection, he noted. Although those infected may not feel ill, they can be contagious and put others at risk.

The vaccination roll-out needs to be accelerated in order to protect more people quickly.

“To prevent severe Covid-19 from developing, the government really needs to ramp up its vaccination efforts further. I suggest that we ramp this up to say 300,000 to 500,000 doses per day. This will reduce spread by asymptomatic and unlinked or sporadic cases, which is worryingly high at the moment,” said Prof Awang Bulgiba.

Malaysia is struggling to flatten the curve of infections with a third nationwide lockdown that ends on June 28.

Some 200,000 vaccinations are being given out each day as the country races to immunise as many as it can.

The deaths could have occurred due to a lack of self-regulation or even a lack of awareness of infection, she was quoted as saying by the Malaysian Insight news website.

Dr Chee said Covid-19 patients should use oximeters to measure their oxygen levels while in quarantine at home.

People should also get tested for Covid-19 immediately if they have symptoms, regardless of whether they have been in close contact with a positive case or not.