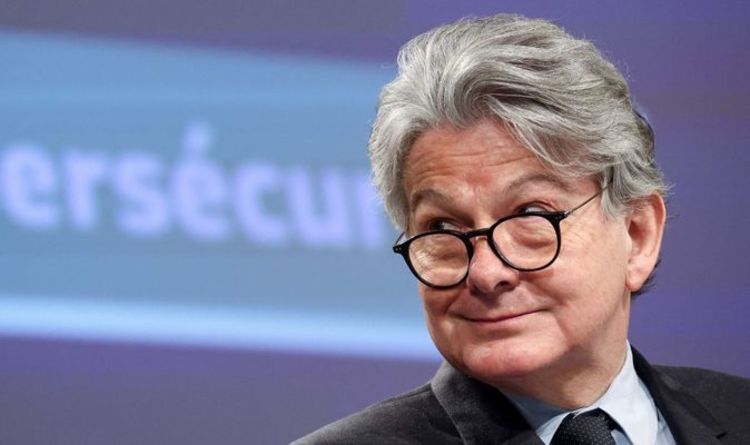 Amid the risk of inflaming tensions between the UK and EU, the Commissioner for the Internal Markel revelled as 73 percent of Ireland has now been double-vaccinated. Following his remarks, David Jones, Deputy Chairman of the European Research Group insisted the comments show France’s hatred towards the UK. Speaking to Express.co.uk, Mr Jones said: “What it does illustrate is the fact elements of the French administration are viscerally opposed to the United Kingdom.

“That remark was purely gratuitous. If he were in a position to say France has surpassed the UK in terms of vaccinations then I suppose I would understand it.

“To suggest Ireland is doing better is rather weak really.

“Of course it also means that Ireland is doing better than France as indeed England is.”

He said: “More than 70 percent of Irish adults are now fully vaccinated, surpassing the UK (73 percent vs 72 percent).

“And the Ramp Up continues: Dublin-based pharma company APC is investing in a new multi-technology vaccine factory.

Micheal Martin, the Irish Taoiseach also jumped on the comments to brag as Ireland “edged ahead” of the UK.

Germany, the powerhouse of the bloc, has only managed 59.1 percent with the majority of the bloc registering under 60 percent.

In contrast, the UK has now double-vaccinated 73.2 percent of the population as of today.

A further 88.7 percent of the population has also received one shot of the vaccine.

The clash over vaccines is one of the many areas the EU and France in particular, have attacked the UK for.

EU officials had cast doubt over the Anglo-Swedish AstraZeneca vaccine earlier in the year.

A study published in The Lancet has now shown the vaccine to carry the same risk of blood clots as the Pfizer drug despite prior comments from EU officials.

French officials have also criticised the UK for placing it on the amber plus list due to the Beta variant.