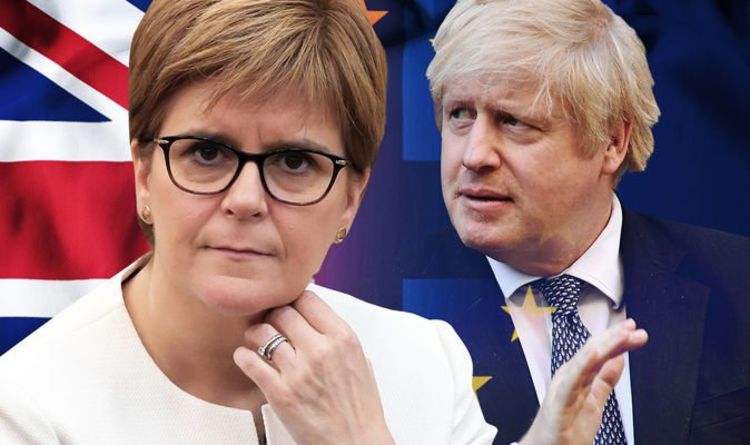 It came after the Prime Minster ordered the UK to prepare for no deal. Mr Johnson said the UK should prepare to move on to Australian-style rules when the Brexit transition period ends at the end of the year.

The Prime Minister said discussions in Brussels have made it clear the EU is not going to offer the Canada-style arrangement he has sought amid clashes on fishing and regulation issues.

Michael Russell, Scotland’s Constitution Secretary who looks after Scotland’s Brexit affairs said Scotland did not vote to be dragged out of the EU.

Mr Russell described Westminster officials leading the negotiations as “arrogant and stupid” after the Prime Minister claimed there will be no more trade and security talks unless the EU adopts a “fundamental change of approach”.

The SNP politician said Brexit “should never have been allowed to happen”, adding: “The current course being taken to Brexit by the UK Government is reckless brinkmanship and the only possible outcome is bad.

“The Prime Minister has told the UK, and Scotland, that a calamitous ‘no deal’ Brexit is not only still on the table, but should now be embraced with high hearts.

“It is beyond belief that in the midst of a global pandemic and deep recession that this is being considered in any way, let alone such an irresponsible one.”

Mr Russell claimed leaving the EU without a deal would cause chaos at English ports and severely jeopardise Scottish exports.

But, he said a deal could still be salvaged, adding: “That would require major U-turns in the UK government stance.

“And at this late stage, if there was to be a deal, it will be a really poor deal.”

But this afternoon, Whitehall officials said any prospect of a U-turn was “ridiculous” with one official telling Express.co.uk: “There is no basis for negotiations unless Brussels changes its stance.

“Scotland will benefit from the new UK Internal Market Bill which will protect jobs and businesses, the current approach by Mr Russell is to separate not work with us and it’s disappointing.”

Cabinet Office minister Michael Gove, however, insisted that the door is “ajar” for post-Brexit trade talks to continue with the EU after Downing Street declared negotiations as “over”.

Mr Gove accused EU officials of not being serious about making compromises and said they would have to back down if chief negotiator Michel Barnier is to resume negotiations in London this week.

But, he added on the BBC’s The Andrew Marr Show, that “we are ready if required” to leave without a trade deal, which he admitted would not “be a picnic”.

He earlier told Sky’s Sophy Ridge on Sunday that the chances of getting a deal are “less” than the 66 percent he had previously predicted.

“It’s less. I can’t be precise, but one of the reasons why it’s less is the position that’s been taken in the last couple of weeks by European Union leaders,” he added.